Showing posts from November, 2010
Show all

A gust of wind, an eagle and an old dog. 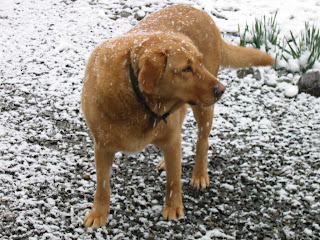 It was a typical December—grey skies, colder air, barren trees. Also typical was the office rush—moving orders across our desks, sending apples to remote places far beyond the view outside. Yet, something was quite different. Angel, our devoted family dog was facing her final days.

Years ago, she came to us as a puppy. We had just moved from the city—to the country—and Angel, several months into her life—had only known a kennel. We adopted one another. To be truthful, I was never the dog person my kids and husband were. Yet, Angel never treated me with anything less than her full devotion.
Angel grew up with the kids and then watched them get older and busy with their lives. She had to wonder about them and their absence, but as a loyal mate, she remained faithful to my husband and me. Angel never pushed herself on me even though she probably missed those early days with the kids, and those hearty dog hugs.
The years had changed our family, as they had changed Angel. She walked sl…
Read more

Ever since I discovered it’s more fun to give than to receive, my hallowed gift-buying frenzy begins the day after Thanksgiving. A couple things happen. First, I make lists —typical for Type A’s. It’s a scrupulous inventory of everyone needing gifts. Then I flounder as my undeveloped creative Type B mind tries to think of something remotely unique to give.
Even though all the family adults have agreed to curtail gift exchanges, my sister artfully suggested we exchange “token” gifts—something that she utterly excels in. Her “token” gifts are exceedingly clever, highly creative, and make me look pitifully weak in comparison. I’m sure this makes her feel even better. We’re sisters, after all.
Black Friday’s here and I’m wondering how I can make the list in my hand transfer into gifts that mean something. That’s always the rub. You see, my sister has this knack of finding just what someone needs, something they aren’t expecting, haven’t asked for, and are totally surprised and delighted whe…
Read more

These are some things I wasn’t thankful for. Until much later. 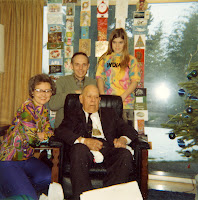 ~ Each Christmas I would receive a hand knitted sweater from Grandma. I remember being disappointed that the large box didn’t contain a toy. It continued into my teen years when all I wanted were “real” clothes. Now, I wear some of those sweaters and recall the thoughtful woman who spent hours creating each one.
~ It was always the same bold red words on most of my First Grade class assignments: "Karen, I know you can do better than this.” I’d hand each one to my parents and they’d read those words to me until I’d memorized them. In the years that followed those same words came to mind each time I did less than my best.
~ On my birthday Mom would give me a specially chosen book she had discovered on one of her many bookstore explorations. It created an amazing collection, but as I got older many books were left unread and unappreciated. Now, they hold a special place on my bookshelf, for I can no longer talk to the wonderful woman who was thinking of me as she selected each one…
Read more 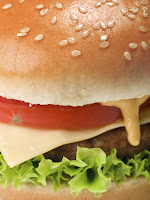 I heard a news report stating that obesity was socially contagious. They warned about hanging out with friends who are downing super-sized fries and drinking shakes because there’s a chance you could catch their obesity tendencies.
Well, if obesity is socially contagious then I consider eating disorders and the fixation on body image just as socially contagious. We tend to do what those close to us do.
Men don’t seem to get as warped about their body image as women can. And men don’t really know what it’s like to be bombarded with images of feminine perfection. Thumb through women’s magazines and half the articles deal with diets and improving looks--and how both seem necessary to be desirable.
While some women have a harder shell than others—or a stronger self-esteem, living in a culture of sexploitation is not easy. Yep, body perfection can be a socially contagious mindset sometimes leading to eating disorders or for the financially inclined there’s cosmetic surgery. Over 11 billion…
Read more 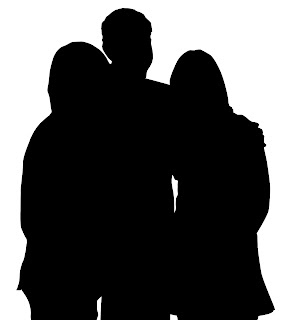 Something interesting happened just over a year ago. My past was reunited with my present thanks to Facebook. Suddenly I was writing to the very people who remembered me as a terribly shy grade-schooler, an awkward tween, and an over-zealous academic nightmare in high school. They “friended” me. Even better, they don’t think less of me now for what I was then.
I also have family stretched across the time zones--many with babies being born I have never seen, until Facebook. I can be part of their lives as I read their posts. I’ve learned what’s challenging them while also viewing video clips from birthday parties along with the cute kiddie antics that reveal the unmistakable genetic connections.
I have moved eight times in the past 30 years. That’s eight different communities, with different schools, clubs, churches, stores and an array of friends who’ve shared my life in each of those special chapters. The loose strings from those years have been pulled together again as some now shar…
Read more

Is voting worth it? 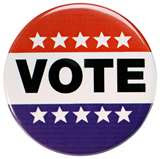 I have voted in every election since turning 18. In the past 34 years I have voted for some winners who turned out to be losers. And other times I have wondered if the loser would have been a better choice. I usually ignore the ads, and instead study the issues and research the candidates.
Most everyone agrees our nation has desperate problems; it’s the solutions that can cause dissention. I am not, nor hope to be a candidate for public office. It seems there must be easier ways to go crazy. Truly, can it be fun to have half of the population hate you at any one time?
I decided to conduct a totally informal poll about voting. Most of my respondents felt that voting in the election would NOT make a difference in the journey ahead. Some weren’t going to even bother voting. Wow. But if voting no longer matters, what do we have left?
Most would consider me to be optimistic. Some would say ridiculously so. But lately, I find myself more inclined to plan for hard times. Will voting change m…
Read more
More posts