Long before government programs assisted single moms and children, Mae needed to find a way to support herself and her young daughter, Gracie. Her husband, the philandering accountant, had run off with another woman. She was desperate but not undone.

He’d left her with a car and a couple suitcases of clothes. Mae promised her landlord to pay for their room within a month. She then drove with her daughter to Providence Hospital and offered a shuttle service.

Maybe it was the plight of the young mother, or the fierce determination in her willingness to drive anywhere at anytime, but her business soon thrived.

Mae was dependably dropping patients off, running errands, and delivering nuns from their convent to their work at the hospital. Mae became an Uber driver nearly one hundred years before Uber.

Not only did Mae survive her divorce, she found out she was a savvy businesswoman.  Her daughter, inspired by the nurses, graduated with honors from college and was hired by one of the nuns whom they’d driven for all those years.


Government support can be important, but something happens when you work through hardships, discover your abilities, and rise again. God can use challenges to re-shape us into people who are stronger versions of ourselves. 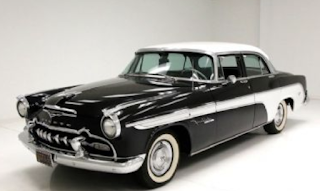 I appreciate Mae’s determination, which became Gracie’s motivation, which has become my inspiration.

I was four when my Great Grandma Mae reluctantly relinquished her driver’s license along with her 1960-era Desoto, but she kept her fiery determination to live each day with a full measure of purpose.